I’m a Systems/Software Engineer in the San Francisco Bay Area. I moved from Columbus, Ohio in 2007 after getting a B.S. in Physics from the Ohio State University. I'm married, and we have dogs.

Under my github account (https://github.com/addumb): I open-sourced python-aliyun in 2014, I have an outdated python 2 project starter template at python-example, and I have a pretty handy “sshec2” command and some others in tools.

While I wait for the locksmith...

I locked myself out of my new apartment within a week of moving in. I should really never keep any keys inside what they unlock.

It can't be that complicated to break into your own apartment. I almost tried climbing onto my little balcony and leaning over to break through the screen on my open bedroom window.

So with a new apartment come new feelings of material inadequacy. I don't have ____! I need to get ___ like this weekend holy crap! I'm getting Internet which is basically required for my job, but I'm also getting cable TV, which I've never actually done before but have always been a fan of. I mean, now I can watch How Its Made and get mad at Mythbusters for their lack of scientific rigor.

I don't have a TV though. It's kind of difficult to enjoy cable TV without a TV. Some say I could omit the "without a TV" altogether, but they've never come home to The Discovery channel after another 11 hour day at work.

Where is the locksmith?? Dayum, son! You said you'd be here by now and I want to play Oblivion! I have my computer monitor hooked up to my PS3 slim.

There it is! Percieved material necessity. Why'd I get a PS3 slim? Because they are awesome and so much fun! Why do I need a couch? They're fucking COMFORTABLE! 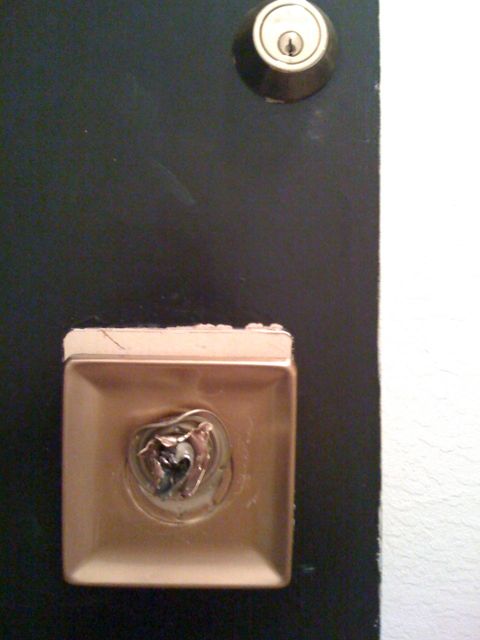 He broke the damn lock apart. He was a really nice guy and I gave him a shitload of money to do so.

And then I got a flat tire in San Francisco the next day. FML

This work is licensed under a Creative Commons Attribution-ShareAlike 3.0 United States License. :wq